“Show of Life”, Nikolai Konstantinovich Rerich – overview of the painting 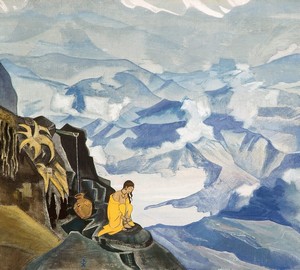 Like all other works of Rerich, this picture is deeply metaphorical. It has a underlying meaning and has a deep philosophical interpretation. Behind the seemingly simple worldly scene are the feelings of the artist, which he experienced in relation to everything living. The canvas reflects his philosophy, understanding the mystery of being, the desire to know which led him to India, in the Himalayas.

The main area of the picture is occupied by the image of the mountains. It is presented in such a way that the viewer seems to be looking at them from a considerable height. This gives a canvas perspective and fills it with vast space, air. The mountains are snowy, covered with ice. In cold light, they are poured with all shades of blue, blue and lavender color. The image of the mountains makes the picture large-scale, even monumental.

Meanwhile, the part that is the main plot of the canvas occupies the very edge, lower corner of the picture. Despite the simplicity of the artistic method, this fragment is filled with the deepest meaning.

In contrast to the main part of the canvas made in cold paints, in this fragment the master used more saturated, “dense” and expressive shades. The image is dominated by black and yellow (gold) color, which gives rich reflexes and turns “deaf” and “flat” black into a warmer and more lively color. If you look at the picture, you can see a very modest addition of dark green, emerald hue, which will diversify the color scheme and increase the contrast with the main image of the mountains.

This expressive element of the picture is a steep ledge of the mountain with its source of life. The artist makes it clear that people are familiar with the miraculous power of water, because it flows down the man-made wooden groove. A young woman is sitting on a ledge, dressed in bright yellow clothes. Behind her is a large clay jug in which the magic moisture flows. The woman thought deeply, while the drops of wisdom, knowledge and life itself gradually fill the vessel of being.

One can interpret the meaning of the picture differently, but most researchers agree that the water here symbolizes everything most valuable to human life, and the vessel in all religions served as a symbol of man: how can you fill it, you will receive such a person. The purest, clouded mountain source is the opportunity to obtain the most secret and important knowledge that can fundamentally change human existence.