“Sister of Mercy”, Nikolay Alexandrovich Yaroshenko – overview of the painting 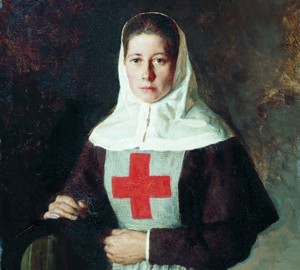 Sister of mercy – Nikolay Alexandrovich Yaroshenko. Oil on canvas
The artist depicts on his canvases people who have internal power to bring human dignity through the trials that have befallen them.

In the eyes of the sister, mercy and perseverance are visible. During the day, she helped many wounded and sick, and as much as they were waiting for her help. Despite her fatigue, she realizes that she is obliged to fulfill her duty, because the life and health of dozens of people depend on her.

Sister presses her hand to the lower abdomen, obviously suffering from pain. But her direct posture and unshakably calm face emphasize the firmness of her character.

She is a strong personality for which the ideal of service in the name of bringing good to humanity is of paramount importance.

The fact that her work is really necessary and useful gives her strength in order to overcome all difficulties with an unshakable face and unchanging moral principles.

It is worth noting that Yaroshenko was interested in just such formed, not having the slightest doubt about his destiny, people. He himself said that he did not portray persons who did not represent moral interest for him.

Yaroshenko attaches great importance to invariability and stability. The fact that in his works periodically appears is the motive of the highlands, the strength of human dignity, not surprising – both phenomena have a common basis.

This is what Yaroshenko most appreciated, consistently and adamantly, in life and in work, adhering to this position. Beauty and morality for him are one and the same phenomenon, which is characterized primarily by firmness and inviolability. The elusive and transient artist did not like and did not recognize.

In the eyes of the sister of mercy, in the posture of a fireman, in the inviolability of mountain peaks, the same meaning is hidden.