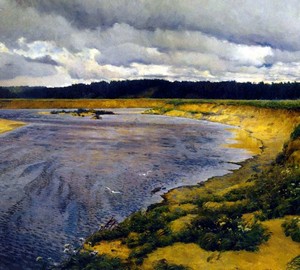 Siverko is a word familiar to the inhabitants of Pomorje and the northern regions of Russia. So from a long time they called the cold wind from the north, which caught clouds, bad weather and literally pierced to the bones all living things in their path even in the summer.

A canvas under this name was written by the landscape artist Ilya Ostroukhov and exhibited at the XIX exhibition of the Partnership of Travel Exhibitions. Even before the picture hit the exhibition, it was acquired by Pavel Tretyakov for her meeting, which later became the famous Tretyakov Gallery.

This picture cannot boast of some exotic plot or colorful characters. This is a typical landscape of the central part of Russia or its northern lands. It depicts the bend of a wide river. Such a motive is often found in artists. But here the landscape is served from an unusual point of view. It seems that the viewer himself stands on the banks of the river and observes how a strong wind causes ripples on its surface and catches up with gloomy lead clouds covering the bright sky and hanging low above the flat, open landscape.

The artist skillfully emphasized the features of the river, one side of which is gentle, and the second is quite steep and plump. The shores are sandy, golden, pleasantly contrasting with the cold colors that display water and the cloud sky above it. White gulls fly down from the steep coast, as if frightened by the artist, emphasizing the mighty and greatness of the river. She turns aside, leaving on her way small islets in the bend, covered with low but rather thick vegetation.

On both sides of the river, green meadows with flowering herbs extend, and a forest that hides hills under it rises on the horizon with a dark emerald strip. Low clouds are reflected in the water, and ripples and stripes on it emphasize how strong the duff blows.