Solemn meeting of the Council of State, Repin, 1903 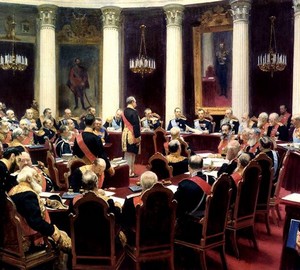 Having the undoubted authority of the outstanding artist of his era, Ilya Efimovich Repin (1844-1930) in April 1901 received a government order to fulfill the monumental canvas, designed to become a “monument” to the 100th anniversary of the establishment of the State Council.

The talent of the painter was fully manifested in the compositional solution of the multifigure picture. Having outlined the prospect from several points of view, the master gave a panorama of the hall, where for the entire scale of the canvas, none of the participants in the meeting is lost among the rest and the face is quite recognizable.

The observed characteristic gestures of officials talking among themselves or carefully listening to the speaker, the general lively atmosphere and the veracity of the transmission of the smallest details create a sense of complicity with what is happening, the viewer seems to be involved in the meeting process.

The artist first wrote sixty portraits of statesmen, and then transferred to a huge canvas. To create a group portrait, Repin attracted students – B. M. Kustodiev (who performed mainly the entire right part of the canvas) and I. WITH. Kulikova (who worked on the left, respectively). The entire central part is written by Repin himself. He documented the meeting in the round hall of the St. Petersburg Mariinsky Palace, decorated by the end of the 19th century with portraits of former Russian autocraters – Catherine II, Alexander I, Nicholas I, Alexander II and Alexander III. Being admitted to meetings and performing preparatory sketches and drawings for the work, Repin also used the camera.

Currently, this canvas and the accompanying natural etudes have a separate hall of the State Russian Museum.