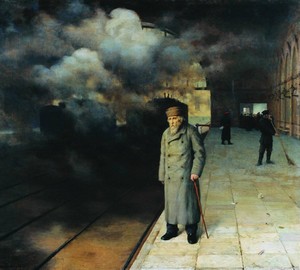 Held – Nikolay Alexandrovich Yaroshenko. Oil on canvas. 125 x 150 cm
In the picture of Yaroshenko “Spent” we see an elderly person who, spending his loved ones on a long journey, thinks about how he will yearn without them.

It is significant that he does not look after the departing trains. This person, who has lived a long and difficult life, understands that this way he will not ease his suffering.

His affection for loved ones is so acute that it will be easier to completely suppress thoughts about them for a while than, prolonging the time of farewell, once again stir the wound.

As a joke (but, perhaps, there is some truth in this), it was suggested that the paintings “Spent” and “Chachotochny” are interconnected. It was alleged that the old man depicted on the canvas spent on the last journey a sick girl whom Yaroshenko painted with Anna Chertkova.

Indeed, the features of the face, the pose in which he stands, are so sad that you might think that one of the relatives from the trip will not return.

Various assumptions can be made: the version that among the departures was a sick consumption, and the trip is needed in order to improve his health, may well correspond to the author’s plan. This becomes especially likely when you consider how widespread tuberculosis was in those days (the author himself suffered, including).

The viewer independently guesses what is shown in the picture, what circumstances forced people to experience certain emotions.

One thing can be said for sure: an artist with great art depicted the sadness and longing of the old man. Smoke clubs, slightly muffled tones, a lighting game that seems to highlight the main character, hiding everything else, create a special atmosphere.

Looking at the picture, even a callous person will definitely feel how compassion and a sense of love for humanity fill him. Other works of the painter cause the same emotions.