“Spring in Italy”, Isaac Ilyich Levitan – overview of the painting 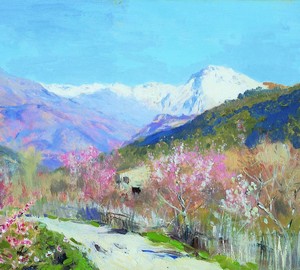 At the end of 1889, Isaac Levitan first went to Europe. The purpose of the trip was to get acquainted with Western art, and especially with its modern trends. As we recall, during this period, impressionism moved in Europe with confident steps. Isaac Ilyich was very lucky – just at that time the World Exhibition was held in Paris, at which all the achievements of modern art were presented.

Between 1889 and 1990. the painter creates a number of works dedicated to Italy, among which the presented works are perhaps the most colorful and cheerful.

Both canvases bear the same names, depict the same landscape and are written in the same year. In the first picture, we see spring that has just entered its rights. Even the snow did not have time to come off, the mountain peaks sparkle with ice caps and the air is still fresh and transparent in the winter, but already violent greens delight the eye with its brightness and purity, and the bushes dotted with gentle pink flowers.

In the second picture, Levitan depicted late spring, which is about to give its rights to summer. The bushes became even larger, the snow has long gone down, and only the mountains sparkle also brightly.

It can be noted that not only time (beginning and end) is distinguished by two canvases – the work is different in the position of the sun. It can be assumed that in the first picture the sun is in its zenith, because the landscape is so bright, but the second canvas is illuminated by the sunset sun, which can be judged by more calm tinted colors.

While in Europe, Levitan also tried this method, creating variations of the same plot. Is it possible to argue with the fact that he did very accurately, subtly and talentedly?…