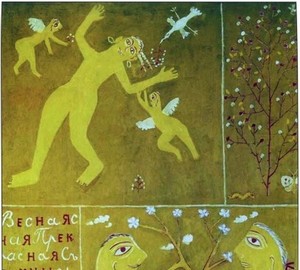 Spring. Seasons (New primitive) – Mikhail Fedorovich Larionov. 1912. Oil on canvas. 118×142
The leader of the movement of Russian avant-garde in the late 1900s and early 1910s, M. F. Larionov (1881-1964) attached great importance to sincere, naive and at first glance frivolous children’s creativity, since it always directly comes from the depth of the child’s consciousness. By imitating the naive children’s drawing, the artist sought to create works equally sincere and direct. Looking at the world through the eyes of a child, Larionov wrote a series of paintings “Seasons”, where every season personifies an uncomplicated image of a female figure, and next to it is an explanation written deliberately sloppy. However, the embodiment of the plan was not childishly deep.

Spring is surrounded by clumsy winged angels, spring rooster carries her a twig with blooming kidneys; next to the right, the same tree is fenced off with a vertical strip, which can be interpreted as the biblical Tree of Knowledge. In the right part of the lower “register” of the picture are depicted male and female profiles, on both sides of the knowledge addressed to the Tree – images of primitive Adam and Eve, apparently experiencing the awakening of tender feelings, just as nature itself awakens, and possibly already tasted the forbidden fruit. In the same space, very below, another biblical plot is guessed – “Expulsion from Paradise”. In the left field of the same lower “register” follows the naive description of spring, as if made by a child: “The spring is clear, beautiful. With bright colors, with white clouds ”, in which, however, some art of the artist is felt. After all, it is no coincidence that in the subheading of the name we read “New primitive” and mentally end “.. .on the eternal theme. ”.