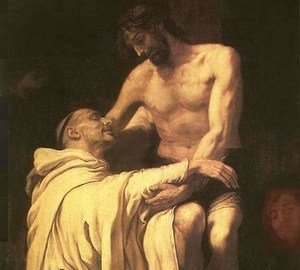 Francisco Ribalta is a Spanish painter, creator of a shadow school in Valencia, a Catalan by birth. Between 1585 and 1598 he worked in Madrid and Escorial, where he painted mainly portraits and paintings on religious subjects. From 1599 until his death he worked in Valencia, with the exception of a trip to Italy, which took place between 1616 and 1620.

The canvas depicts the founder of the Order of the Cistercians, St. Bernard, who at ecstasy fell to Jesus, who had escaped from the cross. The plot for the picture was borrowed by an artist from P., published in 1599. Ribadeneira.