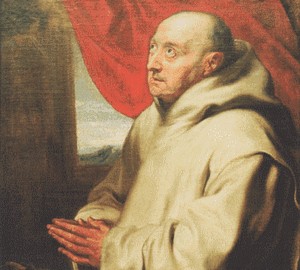 St. Bruno – Antonis van Dyck. Oil on canvas. 97.5 x 78 cm
The painting “St. Bruno” is supposed to be performed by Flemish painter Antonis van Dyck in the early period of his work, when a young artist, already accepted into the guild of St. Luke and having his own workshop, helped Peter Paul Rubens paint the Jesuit church in Antwerp.

On this canvas, St. Bruno is depicted during prayer in his cell. A strong bright body of his figure is shown in three quarters against the background of a window half curtained with bright fabric, in which the blue ones of the surrounding landscape are barely distinguishable. To give the appearance of the saint greatness and monumentality, the artist has his picture in the foreground, bringing his character as close as possible to the audience.

Van Dyke emphasizes the power of an idealized image with a stream of light falling from above. Lighting here carries an important semantic load: light is a symbol of Christ, it is to him that the eyes of St. Bruno are fixed. A portrait-tracted face is depicted large and boldly, the master’s attention is focused on him and on the hero’s hands. There are no additional attributes in the work, and the clothes are extremely simplified. The draperies are made with wide strokes with strong lighting effects and deep shadows. Towels are designed in warm colors, built on a combination of red, beige and brown tones.