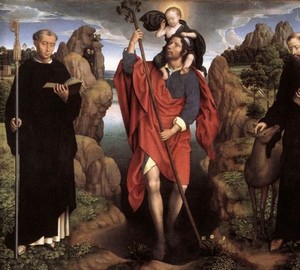 St. Christopher – Hans Memling. 1484
In 1484. Bill Moril ordered Memling triptych for the altar of the chapel in the church of St. Jacob in Bruges. On the central part of the altar are depicted St. Moor (in the form of a Benedictine monk) and St. Gilles (with a hand lantern), and between them – St. Christopher carrying the Baby Christ on his shoulders. In the cave in the rock, the hermit holds a lantern, showing the travelers a dangerous ford. The baby on the saint’s shoulders raised his right hand in blessing. The gaze of Christopher is directed up; in the expression of his face, it is clear that he found out who he was carrying, at the moment when the leaves fell miraculously on his pole. Memling transmits the gigantic growth of Christopher, depicting his legs under water below ground level.

SV. CHRISTOPHOR. A resident of Canaan, distinguished by tremendous growth and strength, St. Christopher converted to Christianity to serve the most powerful master. The hermit told him to help those who want to cross the dangerous river. Once the child asked to be transported across the river, Christopher took it on his shoulders and entered the water. With each step, the water became more stormy, and the child was heavy as lead. When they got to the other side, the Baby revealed to him that he was Christ, bearing the brunt of the whole world. He ordered Christopher to stick his pole into the ground, and the next morning the pole was covered with fruits and leaves.