St. Jerome brings a lion to the monastery, Vittor Carpaccio, 1502 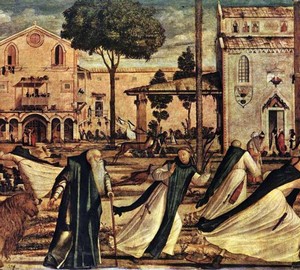 St. Jerome brings a lion to the monastery – Vittor Carpaccio. 1502
Carpaccio wrote in 1502. two paintings on the themes of the legend of St. Jerome as part of his interior design for the School of Di San Giorgio del Chavione in Venice. The picture depicts an episode in which the lion wandered into the monastery of St. Jerome is lame due to a splinter in the paw, – Carpaccio shows a lion standing on three legs and with a face distorted by pain. The monks fled in a panic, but Jerome affectionately accepted the beast, healed it and tamed it to do useful work. The holiness and safety of the monastery are conveyed in the picture by the presence of quiet and harmless creatures, such as lan and pheasant. The figures in the turbans are probably allusion to the wars that Venice waged with Ottoman Turks; like a fierce lion, the Turks can be reconciled and introduced into a civilized framework by the power of the Christian faith.

SV. IERONIM. Jerome was one of the four Fathers of the Catholic Church along with the saints of Amvrosius, Augustine and Gregory the Great. At XV century. Jerome was often represented as a hermit-pater in the desert, praying before the crucifixion or knocking himself on his chest, in a cardinal hat, with a nearby lion roaming him, as Kozimo Tupa depicted him (d. in 1495).