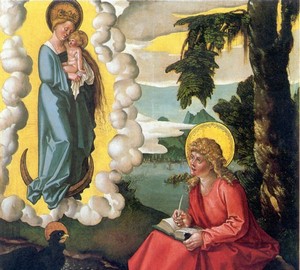 This work depicts John the Theologian during his stay on Patmos, where he was exiled by Emperor Domitian for a testimony of Jesus Christ. According to tradition, he is busy composing the Apocalypse. The artist, following the Holy Scriptures, depicts John in the desert landscape at work. Before him arises “dressed by the sun, with a month at his feet” Madonna with a baby in her arms. John is shocked and admired by the vision of the Virgin in a luminous cloud. Against the background, exquisite pictures of nature arise, in the image of which the artist achieved the skill of a sophisticated landscape painter. The biblical episode, so beloved by the northern artists, is revealed by Baldung Green in an unusually calm manner.

An eagle with very keen eyesight is chosen as a symbol of St. John, since its compositions contain the most direct and spiritualized descriptions of God. The bird sank into a book skillfully depicted from a difficult angle. Green color and gold contrast with black plumage of the eagle, emphasizing the contours of the bird.