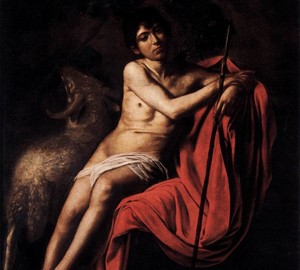 Probably, this work of Caravaggio was one of three paintings that he took with him, leaving Malta for Rome in the hope of receiving a pardon from Pope Paul V after the murder. The artist intended to give these paintings to his nephew, Cardinal Shipione Borghese, so that he would intercede for the guilty person before the pontiff. The painter never returned to the Eternal City, having died on the road, but the remaining canvas testifies to the state of mind in which he stayed in the last years of his life.

St. John the Baptist, who, starting from the Renaissance, was often portrayed not as a mature man, but as a young man, sits immersed in thought. His appearance is full of sorrow, and this feeling is not dispelled by either the warm light pouring the figure or the red drapery. Caravaggio began with bright and happy paintings, then he wrote full of passions and acute drama of work and, finally, came to the permeated tragic sense of being paintings that he created at the end of his short life. The artist’s work reflected his own life path.