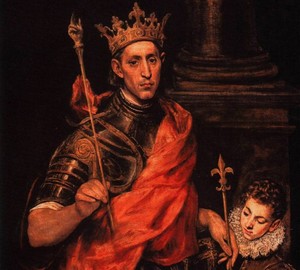 In the second half of the 16th century, Domenico Theotocopuli (1541-1614), nicknamed El Greco, moved to Italy, from where in 1576 he left for Spain, where he lived until his death. In the canvases of the master, subjectivity in the worldview prevails over reality. As a rule, the heroes of his paintings are placed in the irrational mysterious worlds.

El Greco often portrayed saints. In the image of the page for this work, the artist captured his son Jorge Manuel. The figure of Louis IX, canonized by the Catholic Church in 1297, is made in a manner characteristic of him with elongated proportions, as if fixed up, to God, emphasizing the height of the spirit of the depicted person. The sad deep look of beautiful dark eyes on the thin face, distinguished by its pallor in the overall color of the work, speaks of the deep inner life of Louis.