“St. Martin and the Beggar,” El Greco – overview of the painting 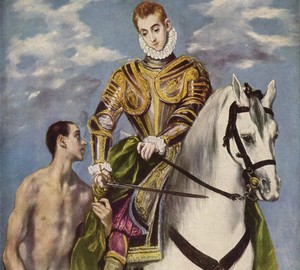 El Greco’s painting “St. Martin and the Beggar” tells of the virtuous act of Martin, the son of a formidable military tribunal. The young man was preparing for military service and became famous for righteous deeds, even before he accepted the Christian faith. So now he sits on a white horse in armor, when a poor, shudder person is at his feet.

El Greco captured the famous biblical plot when Martin, having pity on the beggar, cut off half of his cloak to let him keep warm. And at night Christ himself appeared to him, dressed in a section of a cloak, who addressed him with the words: “It was Martin who put me on his cloak.”. After that, the young man left the army and became a Christian. Later, he tried to convert his parents to faith, but only his mother decided to accept Christianity.

The painter pushed the characters to the fore so that the viewer could carefully consider all the details: the poor figure, Martin’s luxurious vestments, his humble calm face (more suitable for icons), a dagger that cuts the fabric. As a background, the author used a view of the main city in his life – Toledo. With this technique, El Greco seems to combine real and unrealistic. As a certain vision outside of time and space, a religious history appears before us.

All figures are pulled out, as usual by El Greco, and the colors seem to shine from the inside. This is an amazing coloristic feature of the master’s brush – other paintings seem to fade next to his work.

Work is striking in its calm and narrative. There are no apotheoses, holy halo, angels, soaring in heaven, although this canvas does not look less sublime and spiritual, rather the opposite. It is worth paying attention to heaven – the clouds remind us of wings behind Martin, hinting to us that a righteous fate is destined for a young man, and after death he will become one of the most revered saints in Europe (especially in France).