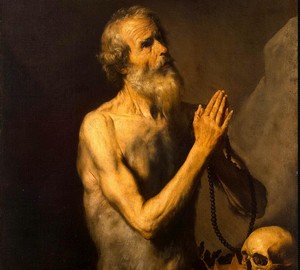 Saint Onufry is a representative of the early Christian deserts who have lived all alone in the desert of Egypt for over 60 years. He is revered by almost all Christian denominations, including Catholics, Orthodox and Eastern ancient Christian churches, in particular the Syrian and Armenian apostolic.

On the canvas de Ribera, the saint is depicted naked in the belt. This is a dry, siney, but not exhausted old man with a gray beard. He prays at the home-made altar, folding his palms, in which long rosary of dark bones of some fruit are clamped. On the altar in front of St. Onufry are symbols of the mortalness of earthly power – the human skull, the golden crown and the scepter. They are nothing compared to the power of the Lord.

The rest of the design of the picture is completely in the spirit of the artist – it is almost completely absent. In addition to the altar with its expressive decorations, you can only notice the “clothes” of the desert, made from leaves collected in nature.

The background of the picture is neutral, which is a cave drowning in a twilight. Only a small, poorly lit part of the wall is noticeable. Everything located behind the saint is deep, thick and unsightly darkness.

The picture is written in the style characteristic of de Ribera, with a pronounced selection of image details by a luminous flux. This method gives sculpture and volume, makes the body alive and expressive.

The color scheme of the canvas is very restrained, one might say, strict. But due to the use of warm expressive shades, it does not look gloomy. The main color here is golden, these are sunlight penetrating through the entrance to the cave. They fill the body of a praying man with yellowish color, giving him special vitality and realism.

The lack of numerous small details that distract the attention of the audience helps to concentrate all the views on the face of the saint. It does not have religious ecstasy, the imprint of experienced torment or suffering. Despite the fact that this man spent his whole life alone in the desert, he did not despair and did not turn into a fanatic. A deep, unshakable faith in the omnipotence of God is literally written on his face. He raised his eyes up and prays not for his own good, but for the well-being of all mankind. It becomes clear why this particular person has become such a popular and revered saint.

The painting of de Ribera, with all the scarcity of the visual means, remains in memory for a long time thanks to the high skill of the painter.