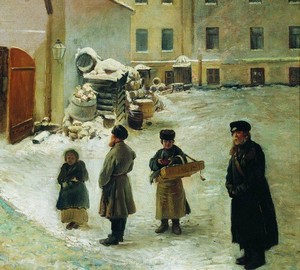 Moskvich Konstantin Makovsky was in St. Petersburg led by a vocation – he came to study at the Academy of Arts after graduating from the Moscow School of Painting. In 1857, a novice artist, who had already been awarded a silver medal for an etude from nature, went to the capital.

During the years of teaching, Makovsky practiced a lot in building compositions, honed the technique, resorting mainly to genre scenes. The work of the St. Petersburg Courtyard belongs to the period of formation of the artist, however, it already demonstrates the talent of the young author.

The picture depicts the classic small courtyard of St. Petersburg – low houses with small windows that flow from all sides, forming a well. In the middle of the snowy courtyard there is a group of people. In the center is a young trader who, pacing the streets, sells his simple goods. On the sides of the boy are two bearded men, and one will turn his face to the audience, while the second stands in our profile. The clothes of men are significantly different: on the hero on the right there is a warm coat and boots, but the second can boast only of boots and a thin Armenian.

The fact that the young heroine of the plot very coldly shows us on the street is on the right. The girl all cringed, squeezed her arms, even her legs crossed.

As for the writing technique, the attentive viewer will notice heterogeneity in Makovsky. All the heroes are written out with particular care, while the snow that the courtyard is spoken is depicted with sweeping strokes, in some places even somewhat sloppy – especially, the space between the girl and the peasant in the Armenian. However, it is these sweeping movements that create a sparkling snow game in the cold, unfriendly sun.

Another piece of the picture attracts attention – this is snow on the roof of a yellow house. Pink reflections of the sun, evenly lying on the snow cap of the house, tell the viewer that the action takes place in the early morning.

In the picture, you can notice some static nature of the heroes and a simplified compositional structure – the later works of Makovsky will be distinguished by bolder solutions, multi-figure compositions and filigree technology. But now, on this canvas, you can see the enormous potential of a student of the Academy of Art, who is distinguished by attentiveness, careful selection of palettes and the desire to find beauty in everyday stories.

Very little time will pass, and a hardworking young man will become “my artist” for the emperor, “brilliant Bones” for friends and another exceptional page in the history of Russian painting.