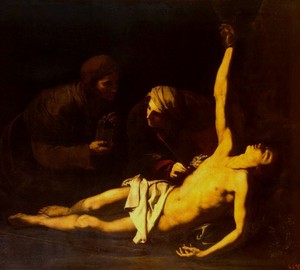 Most often, another fragment of the torment of St. Sebastian was used for paintings – the moment of its execution by Roman archers. De Ribera chose another, rarely seen motive – salvation and cure for wounds. The martyr unleashed, took out arrows, washed the wounds and cured them by another Christian saint – Irina.

Sebastian was a Roman commander, a secret Christian. During the execution of Christian friends, he spoke in their defense. An angel appeared and blessed him, the crowd believed and accepted the forbidden faith. The angry emperor ordered the execution of Sebastian. He was tied to a tree and shot from bows. Obviously, he had many supporters among the soldiers, because not a single arrow pierced important organs.

At night, a local widow, Christian Irina, came to bury him. She took it off the tree and saw that he was seriously injured, but alive. It was this moment that the artist captured in his picture. The saint has not even been completely untied – his right hand is pulled up, tied with ropes to a tree, and the body is already on the ground. The second hand fell to the ground involuntarily, the head was thrown – a man unconscious after suffering torment. Saint Irina removes a deep-seated arrow from his body, and a woman standing next to her knees holds a large glass bottle with some kind of liquid – water or medicine.

This picture was written by the artist in his early years and bears a pronounced imprint of the strongest influence of the Caravaggio school. This is manifested in the choice of color scheme and especially in the light-shielding game. Her background and most of the surroundings are immersed in deep darkness, the figure of the maid is also drowning in darkness, barely intended with restrained and also dark, muffled colors. Against this deep, velvet background, the almost naked body of the saint literally shines in the moonlight. The face of St. Irina is equally brightly highlighted in light. At the time of the removal of the arrow, she turned her head to the maid and said something to her. Moonlight lit up her face, highlighting the sculptural features and arm pulling out the arrow.

Despite the fact that only three figures participate in the scene, its composition is quite complex, even intricate. This is characteristic of baroque. Two female knee-deep figures, almost diagonally located body of the holy martyr, his outstretched hand – all this serves to embody the artist’s plan. Despite the well-built color scheme and the restrained artistic solution of the canvas, it strikes with expression and its expressiveness.