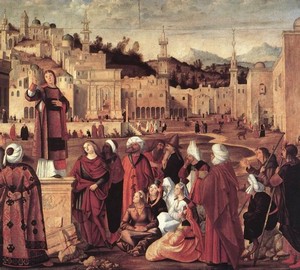 St. Stephen is a preacher – Vittor Carpaccio. Around 1450. Canvas, 148 x 194
Carpaccio picture cycle dedicated to the life of St. Stefan and written for the theological school “Squola di Santo Stefano” in Venice, was launched in 1511. Carpaccio portrays Stefan, dressed in the clothes of the Deacon of the 16th century. and preaching attentive listeners before the meeting. He stands on the podium of an ancient statue, which symbolizes the victory of Christianity over paganism. A figure with a veil-faced face behind a group of seated women is an allusion to the popular Christian allegory, representing Judaism as a woman with a blindfold, blind and deaf to the good news of the Gospels; men behind her are probably members of the Jewish community council who accused Stefan of blasphemy. The octagonal Baptistery behind Stefan speaks of the imminent triumph of Christianity.

SV. STEFAN. Stefan (died approx. 35 g. n. e.) revered as the first Christian deacon and martyr. Legend says that Stephen’s relics were delivered to Rome and placed in the tomb of St. Lawrence. When the tomb was opened, Lawrence moved to give place to Stefan. In Italian and French Renaissance painting, Stefan is often portrayed as a young deacon with the attribute of this saint – a stone that served as an instrument of his martyrdom. In the narrative cycle of the frescoes of Fra Angelico in the chapel of Nicholas V in Rome, he is depicted with St. Lawrence.