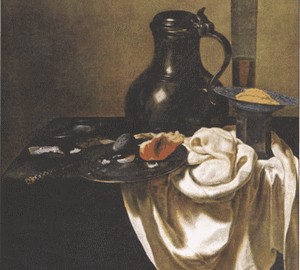 Still life with a tin mug – Willem Clas Heda. 16Z2. Wood, butter. 80×68
The largest master of the Dutch early still life was Willem Heda, who worked in Harlem (1594-1680 / 1682). His favorite motive, repeated in many works, is the so-called breakfast, that is, an image of an indoor table on which a dish with bread or cake, a silver or tin cup, a glass glass, plates and knives are placed. This picture presents all the named objects and in addition to them several sinks with oysters and an egg shell. The artist paints an extremely mundane picture with those products and dishes that could be seen on the table of the Dutch city dweller. However, the simplicity of motive is only deceiving visibility, behind which allegorical meaning is always hidden. The most extreme realism in the still life of the 17th century is naturally combined with allegory. And the more truthful the objects were depicted, the more interesting the mystery of their symbolism became for the viewer.

By the beginning of the century, the Netherlands had an extensive dictionary of allegories familiar to every educated person. With his help, he himself could interpret images of still life. Most often, the opened sinks were a sign of the deceitfulness of carnal pleasures (the same meaning had lemon fruits, beautiful from the outside and very sour to taste). Glass or crystal glasses symbolized the fragility of earthly being, and the drink remaining in the vessel did not fully live life. Bread and red wine resembled the atoning sacrifice of Christ, the egg was perceived as a symbol of the Resurrection, and the empty shell meant the perishable body of the body.