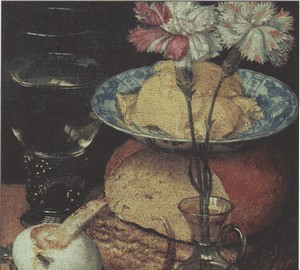 Still life with cloves – Georg Flegel. 1630-1635. Wood, butter. 22×18
Georg Flegel (1566-1638) in his paintings a whole world of tangible things, depicted with detailed accuracy and personifying harmony and the order of being. Flegel, being a master of the so-called deceptions, the illusionistic effect of which could make the viewer believe that there were real objects in front of him, studied with close attention every object depicted by him. On its canvases, fruits, plants, insects, cups and vases are shown in such detail that they look like joint exhibits of very much appreciated collections of rarities in the XVII and XVIII centuries.

At the same time, objects in the artist’s paintings retain all the semantic load that they had in the Dutch painting of that time. In “Naturmorte with cloves”, a transparent vessel means the fragility of the mortal physical nature of a person, and an insect on a broken egg means its damage to sin. A fly was usually considered a way of evil, death, vice, stinginess. Water is a symbol of purification and baptism, two cloves with red and white petals resembled the purity and suffering of Christ, and bread is about the atoning sacrifice and salvation of man.