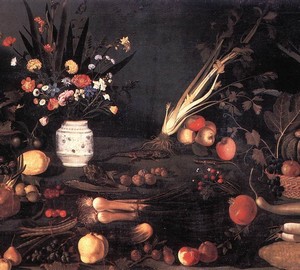 The Italian artist, whose brush belongs to this picture, is conditionally named after the still life stored in Hartford. His real name is unknown, but judging by the works attributed to the painter, he was close to Michelangelo Merizi da Caravaggio: this work was among those seized from Giuseppe Cesari, the cavalier d’Arpino, in whose workshop he worked at one time. An unknown author borrowed a light technique from Caravaggio when the light snatches the depicted from the twilight, and the desire to realistically convey the entire filling picture.

The fruits on the table are laid out so that each of them is clearly visible. There is no center in the composition: both a vase with flowers and a basket with fruits can play its role. Everything is important here: cabbage heads, onions, lemon, grapes, zucchini, apples, pears, leeks, grenades and more. Each fruit also has its own symbolism: the apple resembles the fall of Adam and Eve, the lemon – that under the bright shell of pleasures lies the sour essence, the grapes – the sacrament of the Eucharist, the rose – the flower of the Mother of God, the Queen of Heaven, the grenade – a symbol of the resurrection of Christ.

But first of all, the picture reflects the abundance of earthly gifts. The image in this still life of lizards not only brings revival to the composition, but also hints, most likely, that nature fades and is reborn, as the lizard grows a new tail in return for the lost.