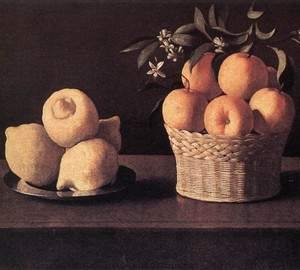 The presented work is the only picture in the genre of still life of the brush Francisco de Surbarana, which the author personally signed, leaving an autograph and the date of creation.

You can immediately notice the originality of the canvas – still life is a three disconnected groups of objects. In the middle of the composition there is a basket with oranges, to the right of it a cup on a silver plate with a rose, and on the left are citrons (although they are mistakenly called lemons).

Researchers believe that this work is not just still life, but a subtle religious allegory. Thus, the author depicted the Trinity, where a rose without thorns acts as a symbol of immaculate conception, and the water in the cup and oranges with a branch personify the purity of the Virgin Mary. It is known that the cup of water and a rose on the saucer de Surbaran duplicated in his other work, performed from the same perspective as this picture.

As a background, the author used black drapery and a dark brown table, thereby maximally focusing the attention of the viewer on the “talking” elements of the canvas.

Thanks to the X-ray of the picture, it is known today that Surbaran rewrote the canvas. In the original version, another plate was depicted between oranges and citrons, on which you can distinguish the favorite treat of the Spaniards of that time – caramelized sweet potato. Subsequently, the author refused this detail – as you know, the artist avoided congestion in his works.

The picture passed from hand to hands of collectors until the 30s. did not end up in the collection of the Italian Contini Bonacossi. Through complex negotiations, we can say with battle, the canvas was left in the property of Bonacossi, avoiding nationalization. In the 70s. the painting was acquired by industrialist and philanthropist Norton Simon, laying out a round sum of money for her, and today the canvas can be seen in his personalized museum in California.