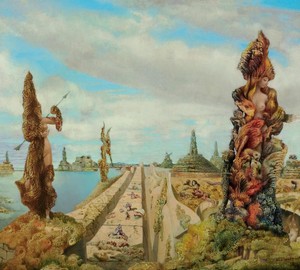 The stolen mirror is Max Ernst. 1941. Oil on canvas

From a distance and not knowing who the author is, this picture can be taken as a classic landscape, for example, one of the Italian masters. The magnificent, naturalistically written cloud sky introduces into the deception. However, looking closely, you find a plot and images that are more like monstrous images from Bosch paintings.

This fantastic picture was created during the terrible war that swept all over Europe, so the beauty of the landscape in it is combined with strange, perverted and unnatural motives.

The picture depicts a fantastic, nonexistent city, as if dreamed of a person with mental disorders (or with a rich imagination). It stands by the sea and as if the whole consists of individual elements crowned with large, and sometimes simply giant figures. Following the rules of perspective, the viewer is taken to the distance by a long road, limited to walls on both sides. A low wide wall protects the city from the sea, and from the side of the buildings it becomes high, thin and curly.

The road begins with two huge figures, remotely resembling classic, but actually consisting of many disparate and extremely strange details. The left figure, facing the viewer, holds a long arrow in his hands. It is strange and unnatural twisted, and half of its naked body is hidden by an incomprehensible formless cloak made in decalcomania technique, like many other details of the picture. The woman’s face is not visible, it is hidden under the robe, and it seems that her head has an extremely high pointed hat on her head like a medieval genie. The right figure is also naked, her face is depicted in profile, but her head seems to be embraced by a flame in which another strange figure is visible.

A variety of strange objects are scattered along the road, which creates a feeling of not that quick flight with some terrible threat, or the consequences of an equally terrible natural disaster. Oddly enough, the gentle pastel gamut not only does not soften the frightening impression left by the picture, but also exacerbates it.

The buildings located in the distance have a step cone shape. They are crowned with large statues in which you can identify with a certain stretch the figures of Buddha, ancient Greek Sphinx, the colossus of Rhodes, the statue of Liberty and even the silhouette of the Eiffel Tower. This picture gives each person the opportunity to test their own imagination.