“Students”, Bogdanov-Belsky – overview of the painting 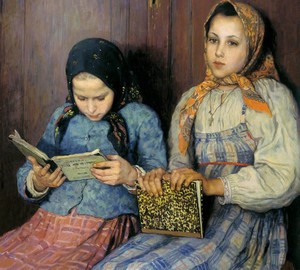 Nikolai Petrovich Bogdanov-Belsky artist of interesting fate – human and creative. A native of the poor Russian hinterland, the son of a bagpipes who did not know his father and lived with his uncle out of mercy. But, having firmness in character, the desire to become a real artist, as well as the happy participation in his life of the great teacher Rachinsky Sergey Alexandrovich, made Bogdanov-Belsky a famous painter.

Racinsky is an extraordinary person of his time. He comes from Polish nobles, he has a great education, scientist, mathematician, botanist, professor at the University of Moscow. But the most important thing he did in life was to open public schools. Ordinary peasant children got the opportunity to study in them. They studied the basics of science, studied Church Slavonic writing, mathematics, notes.

Bogdanov-Belsky spent two years in such a school, but the memories of her, warm and kind, remained with him for life and were embodied in a series of paintings about rural children-schoolchildren.

So, in 1901, one of his simple stories appeared, but filled with soulfulness paintings – “Students”. Two girls are sitting on a bench waiting for a lesson. Peasant girls, their clothes talk about it. Bogdanov-Belsky writes his paintings with such care that you can study the life, life and clothes of Russian peasants from them.

After all, they really dressed in the village at the beginning of the twentieth century – pre-window skirts or worders, a simple white shirt with assemblies, on top of a blouse, heads covered with scarves, an Orthodox cross on the neck. From jewelry – a thin modest embroidery on the sleeves and a bright belt of a sundress.

But these are not everyday clothes, the girls are dressed up, all clothes are clean and new. Going to school is a holiday for them.

The author carefully prescribed every detail of the apprentices’ clothes, to the slightest cell on skirts and flowers on the jacket, to the letters on the book, to the cracks and scuffs of the cabinet on which the seated rest.

One of them is completely passionate and immersed in reading. Another, breaking away from the book, plunged into thoughts, looking thoughtfully into the distance. Perhaps she is trying to clarify what she read, because how much new is revealed to a person after meeting with the heroes of books. Or maybe she was just distracted, thinking about her own.

The faces of girls are modest and lovely. The author simply admires them, their purity and sincerity. According to Bogdanov-Belsky himself, he spent so much time in the village, watching the peasant children, that he loved them with all his heart for their inquisitiveness and credulity, for pressure and immediacy.

He considered it very important to receive education for them, ordinary peasants, and with his creativity he promoted this idea in every possible way. The painting “Students” is a confirmation of this.

Thanks to the talent of the painter, such a simple plot does not leave the audience indifferent. I want to stop and contemplate these lovely faces, consider every detail, think about what the life of peasant children was like in that distant time.

Together with the author, to feel his good attitude and love for the common people, and especially for children, thanks to which his work has become eternal. After all, while there are smiles of children in the world, paintings by Nikolai Petrovich Bogdanov-Belsky will always be in demand.