Svetlana, Grabar – overview of the painting 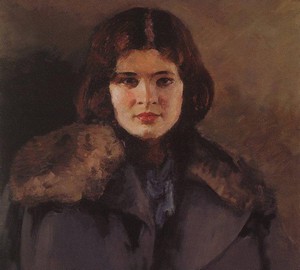 Svetlana – Igor Emmanuilovich Grabar. Oil on canvas. 78 x 62 cm
Igor Emmanuelovich Grabar painted the painting “Svetlana” in 1933, at the age of 62. The only thing that is known for certain about this portrait is that the artist wrote it in one day, and still could not establish the identity of the model.

Of course, there were rumors that the daughter of Stalin, Svetlana Iosifovna Allilueva, was depicted, especially, dark curly hair of the model could have testified to this. But it cannot be said that the portrait similarity is obvious: rather, Igor Emmanuilovich conveyed the collective image without setting himself the task of portraying a particular person.

One way or another, this reproduction hung in many houses at that time, according to contemporaries. People close to the world of political intrigues said that this portrait saved Grabar, who was closely friends with the Trotsky family.

But we will not focus on the political background of the picture (it undoubtedly was). Let’s look at the image of the girl depicted on her: in front of us is a dark-haired stranger no older than 20-25 years old, with a smile and looking directly at the viewer. On Svetlana, a warm coat with a fur edge and a light scarf to the tone of him, closer to the waist, the clothes are obscured and merged with the background.

The background of the picture itself is a vague background without any details. Thus, all attention is riveted to the face of the model. Her lips are touched by scarlet lipstick, and her eyebrows and eyelashes are black by nature, wide cheekbones and chubby cheeks are framed by curls. If you look closely, you can see the asymmetry of the eyes and eyebrows: the artist did not seek to embellish the model, no matter who in reality it was.

And for almost a century from the canvas of Igor Emmanuilovich, a stranger has been watching a slightly pitiful and demanding look. And so far art historians are trying to establish the identity of the model, for the good time writing the picture and the name of the girl provide an opportunity for fantasies.