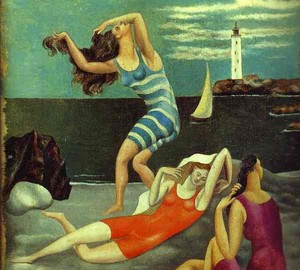 Miniature work was written during the First World War, when the whole of Europe was preoccupied with military operations, waiting for news, worrying about the fate of loved ones. The artist himself at this time leaves Paris on the southern sea coast. “Escape” was associated with a difficult and depressive atmosphere in the capital of France, on the one hand, as well as new romantic relations with the Russian ballerina Khokhlova.

At sea, the master felt an extraordinary tide of creative energy and physical strength. The tension associated with war and creative searches has gone. The spa atmosphere contributed to the removal of all tension and the enjoyment of life.

Swimming in the sea at the beginning of the 20th century was not yet an universally accepted custom. They came to the beaches to take a walk and breathe in the sea air. Therefore, the theme of the picture is very revolutionary on the verge of decency.

On the seashore, three women in colorful swimsuits. Unnatural postures, broken body proportions, but unusually plastic figures, flirty movements and sophisticated. Some signs of the cubic perception of the world are still being guessed in the work, however, the author has already cooled to this direction and is actively looking for new ways in painting.

The background is sea surface, lively with a sailboat, a beacon on a cliff, as well as stylized clouds located in the upper right corner. The master was perfectly able to convey the sea surface. The texture of water is sustained in the strict traditions of realism.

The color of the picture is varied. Muffled background tones explode with bright colors of bathing suits. The work is full of some decorativeness, grace and subtle irony. The audience feels the joy and happiness of the artist, who wrote the work in one of the happiest and most prosperous periods of his life.