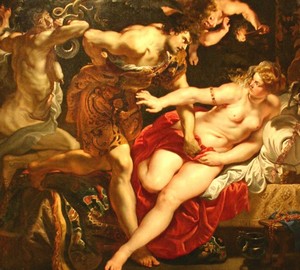 Titian inspired the creation of this picture according to the ancient Roman plot of Rubens. Today, few people know the story that was embodied on the canvas, but during the time of Rubens and earlier it was extremely popular.

The last king of Rome, Sext Tarquinius, captivated by the beauty of the married Lucretia, abused her by force, which subsequently led to a great rebellion and the overthrow of the Roman monarchy.

On the canvas we see the formidable Tarquinia, who reached for the last piece of clothing covering the girl. Amur looks at the pair from above, and the evil Fury with the hair in the form of snakes is located on the right.

Rubens boldly borrowed the composition from Titian, but saturated his heroes with plasticity, and the canvas with bright color, thanks to deep nuances of tones and color contrasts.

During the Second World War, the picture was taken out as a trophy by Colonel Dorofeev from Germany. Much later, relatives sold it to a collector who wished to remain unknown. In 2003, a Russian entrepreneur Vladimir Logvinenko was in very poor condition. In the same year, Germany tried to initiate legal proceedings in order to return the picture, but the new owner was able to defend his ownership.

In 2004, the canvas was restored and today, with the permission of Vladimir Logvinenko, is exhibited in the Hermitage.