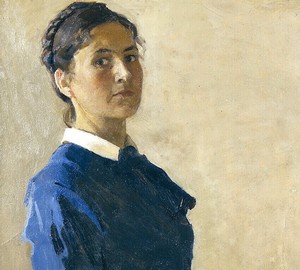 Tatiana Nilovna Yablonskaya – famous Soviet and Ukrainian artist received during his long life in numerous awards. Her work is distinguished by a special style of born under the influence of one of the areas in the post – synthetism. In addition, the work Yablonska shows clearly the influence of folk art. With such a diverse influence her paintings were notable for their unusual beauty and expressiveness combined with the realism and sharp social themes.

Future artist was born in 1917 in Smolensk. In many ways, her creative life was determined by the family, as her father was a famous painter, graphic artist and teacher of literature. Intelligent environment and the troubled times associated with the many changes in the country left its mark on personal lives and on the work Yablonska. Her grandfather on the father’s side was a priest, and it was a direct threat not only to the girl’s father, but the family as well. As a result, the father of the future artist spent too many years trying to emigrate from the Soviet Union and to take his family abroad.

When she was 11, her family moved to Odessa, and then – in Kamenetz-Podolsk. Both move were associated with attempts secretly to get out of the country, as well as with sick children – Tanya and her brother and sister fell ill with pneumonia and barely recovered. In this ancient city, Tatiana graduated from the school seven years and then in 1934 moved to Lugansk. On this father’s attempts to get rid of the Soviet regime ended.

His art education she started a year later at the Kiev art College. When it closed a year later, the girl was enrolled in the painting Department of the Kiev state art Institute (nowadays national Academy of fine arts and architecture). She finished school in 1941. At this time she married the artist, seven years older, but family life is interrupted, barely begun – the war began.

Husband of Tatiana was taken to the front, and she was expecting their first baby, were evacuated near Saratov. On the farm she worked along with the local women, and the rare spare moments he painted portraits of fathers, husbands, sons and brothers who did not return from the war – for the Wake. Her husband returned from the war alive, but life has not worked. Tatiana gave birth to another daughter, but the Union collapsed. She was already a famous artist, and her husband Slava and smiled. Jealousy of success killed the love.

Have Yablonskaya was not only a successful creative life and active career. Over her lifetime she has held many high positions and more than 30 personal exhibitions on the territory of the Soviet Union and beyond. However, her political status of officer of the arts and an MP did not affect her active life position. It was a very brave woman who defended the right of artists to Express themselves. This attitude was regarded as opposed to “the will of the party” and led to numerous clashes with bureaucrats and party bosses. Jablonsky deprived exhibitions, removed her paintings from the exposition, was removed from office. But to change her relationship to art could not even punitive measures. She received the Stalin prize and excellent reprimand her for “anti-Soviet”.

The artist lived a long life, and died at the age of 88 years. The last picture she wrote the day before death, being in a wheelchair for six years after stroke, half-paralyzed. Her paintings are in many museums of the countries of the former USSR, and the family continued the tradition of talented artists.