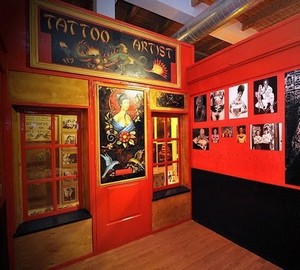 This kind of Museum appeared in fact as early as in 1995, when Henk Chipmaker – artist, writer, traveler and, of course, the tattoo artist opened a tattoo shop. The idea to open Museum came as a result of the fact that during his travels accumulated a vast amount of material relating to this ancient art. Proposal to exhibit the collection in other museums were met with failure. But the Museum was opened on 5 November 2011, despite the implicit rejection by the authorities, but a year later, November 20, 2012, the Museum was shut down on charges hired Henk accountant in financial fraud. Leased premises and all its collection has been arrested. 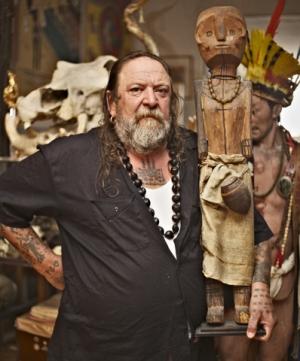 Started fundraisers for the salvation of the collection. To business joined the Society of the “Blue Bone” (Blue Bone Society), a member of which was Hank with his wife Louise. And only in autumn 2013, the collection was finally removed again in the store at van Woustraat 78 in Amsterdam.

Now the collection inaccessible to the public display, if only to ask Hank, taking into account that after the incident with the accountant his motto “don’t trust UN-tattooed”. And while more than 40 thousand exhibits of the future Museum waiting in the wings. In the collection of thousands of drawings tattoo designs of all times and peoples, various tools, paint and recipes, thousands of photos. There is also a traditional Japanese tattoo, and unique stories of old Hungarian prisons, and the combination of tattoo scarring is an amazing neck patterns in relief. Yes, and Hank, too, exhibit all his body covered with tattoos of the highest quality.

Currently, the company “Blue Bone” is collecting donations to create, but within this community, a private Museum. Everyone who donates to the creation of a Museum worth more than € 80 can simultaneously be a member of this society. Certificates will be sent to anywhere in the world. The form of donations is on the website.