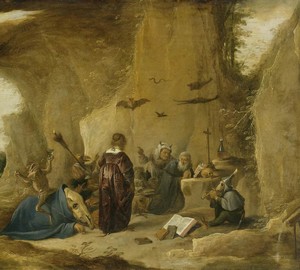 On the hood of St. Anthony (in both compositions), the letter T (tau) is visible – a symbol of the salvation of the soul and a sign of the monastic order of the Antonites, which was established at the Clermont Cathedral in 1096. According to legend (LA, XXI, I), after the death of his parents, having distributed property to the poor, Anthony was completely secluded. Due to the ascetic lifestyle, he was prone to hallucinations. In the picture of Tenirs, the action takes place in a cave, where the saint is scared by fantastic animals and monsters crawling up to him. Near the hermit are the witches that tempt him: a young one from under whose dress a tail is visible, and an old one with horns indicating satanic origin. Praying, St. Anthony patiently waits for terrible visions to end.

The closest analogy, in which, with the exception of the background, the entire curly part of the ermitage composition is repeated, is “The Temptation of St. Atonia “at the Prado Museum, Madrid. A similar image of the cave, especially the left part with the opening, as well as a similar interpretation of some fantastic creatures (for example, a monster with a horse skull) is found in the composition of the same name from the art gallery of old masters in Dresden.