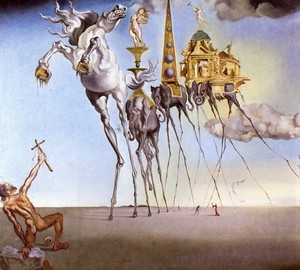 In 1946, American film producer Albert Levine announced a competition to create an image of a sophisticated saint for the movie on the novel by Guy de Mopassan “Dear Friend” (Max Ernst became the winner). The painting “The Temptation of St. Anthony” (1946, the Royal Belgian Museum of Fine Arts, Brussels) was written for this competition. The image of this saint has been repeatedly used in art before Dali. For example, his favorite Bosch created triptych on a similar topic, work with the same name is also found in Cezanne.

On the Dali canvas, these sins are carried by animals on thin spider legs. Surrender to the saint even for a minute – and the legs will break, and sins will fall to the ground, to Anthony himself.