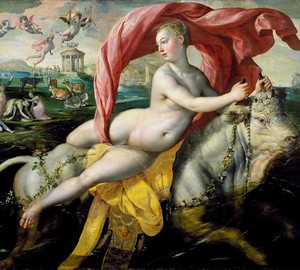 The abduction of Europe is Martin de Vos. 1580
Martin de Vos (1532-1603) was a member of the Guild of Artists in Antwerp, which at the end of the XVI century. became a significant art center. His elegant manner of writing was fully manifested in the painting The Abduction of Europe (end of the XVI century.). The canvas depicts a naked Europe, spread on the back of Jupiter, which turned into a white bull; her clothes are gracefully sighed from the wind above her head, and she herself clung to the horns of a bull. Her sad look is on the shore, where she played carefree with her friends.

Like many artists of his time, de Vos made a trip to Italy, so the picture feels the strong influence of the Venetian artists Veronese and Titian, who wrote on this plot.

EUROPA. Jupiter fell in love with the daughter of the Phoenician king of Europe and, turning into a bull, mixed with a herd grazing near the seashore, where she played with friends. In the painting by Veronese (1580) in the Doge Palace in Venice, Europe admires a beautiful bull and hands him flowers, he kisses her hand. According to legend, Jupiter frolic and played until Europe stopped fearing him, began to hang him on the horns of a garland of flowers and in the end did not climb on his back. Then he rushed across the sea to the island of Crete, where he shared a bed with her. Europe gave birth to Jupiter three sons; one of them was Minos, who became king of Crete. According to another version, one of the sons was the continent of Europe, and Europe itself turned into a bull and became the zodiac constellation Taurus.