“The Appearance of Christ to the People (Chenation of the Messiah)”, A. AND. Ivanov – overview of the painting 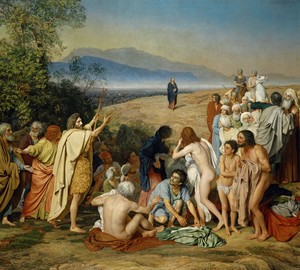 AND. AND. Ivanov, having graduated from the St. Petersburg Academy of Arts, received the right to a retirement trip to Europe and in 1831 settled in Rome, where he came up to the idea of creating a grand canvas, to which none of the artists had ever addressed, the first appearance of the Messiah. The artist took this moment as containing the whole meaning of the Gospel.

The landscape plays a big role in the work. In numerous sketches, you can see how the value of the landscape in which events occur is growing more and more in the picture. Working on a panorama of the world, Ivanov turned directly to nature, his colorful discoveries in the transmission of sunlight and a light air environment largely predetermined the searches of the Impressionists of the second half of the 19th century.

In 1858, the artist returned to St. Petersburg and brought along a canvas, but it did not make much impression on the Russian audience and criticism. The innovative ideas introduced by Ivanov into art – the breadth of the formulation of philosophical and aesthetic problems, a deep interest in history, attention to nature – were fully appreciated by artists from the late XIX to early XX centuries.