The appearance of Sibyla to Emperor Augustus, Paris Bordon 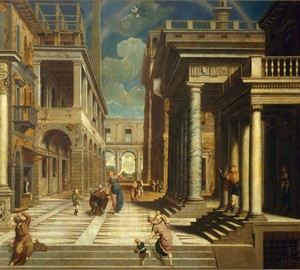 The appearance of Sibyla to Emperor Augustus – Paris Bordon. 1550s. Oil on canvas. 165×230
The painting is an early example of a composed architectural landscape in Italian art. According to Paris Bordon himself (1500-1571), he depicted “five architectural orders in the future.”. The heroes of the legend of the prophecy of the Tiburtinsky Sibyl in this ideal space are only staffajas.

The captive Augustus is depicted in the center of the composition next to the sivilla pointing to the sky, where Madonna and the Baby are manifested in the clouds. To the left of Augustus is a servant with an imperial rod in his hand. However, the main character here becomes the impeccably built space of the ancient city. The artist demonstrates excellent ownership of the direct perspective and knowledge of the warrant system of ancient architecture. With minor characters on the stairs and in the porticks of the building, Bordon creates an almost theatrical mizance. Reliefs on the basement of the building on the left side of the picture glorify the military victories of Emperor Augustus.