“The Appearance of the Risen Christ Maria Magdalene,” Ivanov – overview of the painting 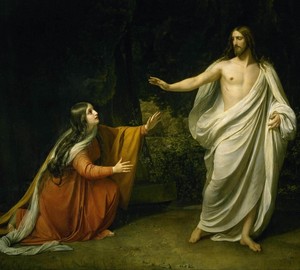 & nbsp This picture A. Ivanov wrote during his life in Italy. At first she was successfully exhibited in Rome, and then was sent to Petersburg as a reporting work of the artist. In the capital, she was enthusiastically accepted and was highly appreciated. For her, Ivanov received the title of academician. The Society for the Promotion of Artists presented a canvas as a gift to Emperor Nicholas I. At first it was exhibited in the Hermitage Museum, but in 1897 the Russian Museum took the picture. There it is stored now.

& nbsp The artist took the common evangelical plot of the appearance of Jesus Maria Magdalene as the basis of a paintings. Thanks to the dark background and frontal arrangement of the figures, Ivanov managed to achieve the effect of the presence of the viewer, as if observing this wonderful event. The artist did not portray anything superfluous, so as not to distract the beholder from two important characters – Christ and Magdalene.

& nbsp A powerful visual effect gives a contrast between the heroes of the picture. It seems like radiance comes from Jesus Christ, which is emphasized by the white draperies of the shroud. His image is full of greatness and seems unearthly. The stopping hand gesture is strict and full of love. “Do not touch me, for I have not yet ascended to my Father,” he says, leaning down Mary Magdalene. A woman reaches out to the Savior, kneeling down in front of him. The artist was able to portray joy through tears on her amazed face. She just cried without finding the Master’s body in the tomb, and now, He himself stands in front of her. To achieve this effect, the artist asked the model to hold the chopped onion in his hands, and he himself mixed it at that time.

& nbsp The red and terracotta colors of Magdalene’s clothes emphasize its landing. She is a living person and remains in this world to convey to everyone about the miracle of the Resurrection of the Son of God.

& nbsp Despite some staticity of carefully written figures on all canons of academicism, the artist managed to convey the deep emotions of the heroes of the picture. Undoubtedly, it is one of the most significant works of the master and in all Russian painting.