“The arrival of the becoming a consequence,” Vasily Grigoryevich Perov – overview of the painting 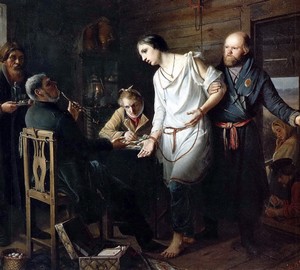 The arrival of the camp for investigation is Vasily Grigoryevich Perov. Oil on canvas. 38 x 43 cm
One of the first genre paintings by Vasily Perov, for which the author received encouragement for an interesting plot and a large silver medal of the Academy of Arts.

A young peasant accused of some kind of act was brought to the investigator for interrogation. Vasily Perov somewhat idealizes a simple guy – albeit torn on his shoulder, a snow-white shirt, white skin and rounded, soft facial features are not characteristic of the poor, working in the fields or in workshops all year round.

But perhaps Perov wanted to emphasize his innocence with this guise of a gentle young man in white robes.

The rest of the court participants are perfectly depicted in complete contrast to it. Perov, as a psychologist, notes the reaction of each character to what is happening.

On the face of the headman holding the defendant is not at all strong, not even some sympathy for the guy.

The secretary-pisher writes something diligently, while his gaze is aimed at the becoming – as if not to miss what the judge wants to say.

Himself becoming, as the focus of the main Russian vice of that time – bribery. He is brought vodka and snack, near his chair a basket of eggs. And it seems that the case has already been decided, the punishment will follow.

Those who beg for mercy and gestures of the guilty person do not decide any role. The fact that the decision was made, and not in favor of a simple guy, is said by figures depicted by the artist outside the door. A sad wife and a man preparing rods for the execution of a sentence.

Perhaps someone will find a somewhat naive and straightforward image on the canvas, but then, back in 1857, the plot turned out to be very relevant, revealing many vices of society. No wonder contemporaries called Perov the successor to the work of the famous master Pavel Andreevich Fedotov, who achieved tremendous success in the genre of critical realism.