“The arrival of the governess in the merchant house”, Vasily Grigoryevich Perov – overview of the painting 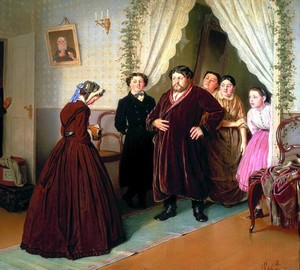 The arrival of the governess in the merchant house is Vasily Grigoryevich Perov. Oil on canvas. 44 x 53.3 cm

The famous work of Vasily Grigoryevich Perov is stored in the Tretyakov Gallery and it is impossible to pass by it, so it is full of human emotions and provides food for thought and reasoning.

The young girl was hired by a rich merchant in the house so that everything was “like people.”. Indeed, in the 19th enlightened century, it was accepted that children of landowners and merchants should be taught by people from educated and intelligent sections of society.

On the canvas, the two main figures are a merchant and a girl. Founder, with his legs wide apart, confident in himself and in his economic position, figure of a merchant. His face with arrogance, condescension and with some curiosity considers the arrivals.

The thin figure of the girl is the exact opposite of the owner. Having bowed her head in a bow, she simultaneously takes out some paper from her purse, most likely documents about herself and about her education. Uncertainty, doom and fear of future life in this house talentedly marked the artist in her figure. But, as often happens, working as a governess is the only opportunity for honest earnings for a poor educated woman of that time.

The figures of the remaining participants in the composition are as if relegated to the background, but they are even more interesting, brighter and more colorful in the manifestations of their feelings, the author wrote everything on their faces.

Oh, and it’s not easy for an intelligent girl in this house. The young merchant, the son of the owner, will surely cause a lot of trouble for the young governess. This is evidenced by his grin and look, according to the artist Perov himself, unscrupulous and curious.

Women behind the owner’s back, possibly a merchant and relatives, do not hide their interested attention to this whole scene. For the sake of such eyes, they abandoned all their affairs and housework.

On the left near the front door, where the guest’s modest luggage is located, the jaw and servants crowded. Their faces are smiling, but it’s hard to say for sure what caused their fun. Either in general a new event in the house, or with grins and jokes evaluating a clearly poor girl.

The only “light spot” in this picture is a girl in a white shirt and pink skirt. Her sweet, still childish little face is full of surprise and joy – because this is a teacher who came to her. Perhaps it is in the master daughter that the guest will find a grateful student and a mental vacation from envious, humiliating, ignorant or rude relationships with other family members.

And they, of course, will be, because the governess will have to depend on his masters. After all, she is in a disenfranchised and hopeless situation, she has to earn a living herself. Unfortunately, this is exactly what happened in society when, after the famous land reforms, competent and educated but impoverished nobles appeared.

The well-known picture of Vasily Perov about the arrival of the governess in the merchant’s house once again emphasizes the position of the artist as a person of freedom-loving and realistic views, showing the lack of rights and subordination of some people to others, depending on the state and estate.