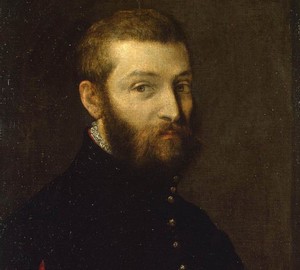 Paolo Veronese (real name Paolo Cagliari), a native of Italy, a brilliant representative of late Renaissance. The artist was born in 1528 in the family of a stonemason in Verona (hence the alias). Have Gabriel and Catherine he was the fifth son.

The Paolo family originally from Lombardy, but at the duty of the father and grandfather of the future artist was brought to Verona where the family remained. Paolo studied with the architect Michele San Michele, but this profession is not attracted to him. Without thinking, he went to the painter Antonio Badile, who also was his uncle.

25 years of Veronese rose to his feet and took up monumental painting. He was a master of composition and an outstanding colorist. Known to the novice artist came in 1553. He was invited to work on the decoration of the Doge’s Palace in Venice. And after painting the ceiling in the library of San Marco decided his fate – from that moment until the end of his life Veronese worked in the genre of monumental and decorative painting.

Until 1555 the artist lived in his native Verona, and then again received an order to Venice. This time he began to paint the Church of San Sebastian. In the late 50’s Veronese tried to paint portraits and this idea come to fruition.

The work of Veronese in Venice produced an extraordinary sensation, he painted murals, temples, churches, portraits. Almost the entire period of his work was held in Venice. His work was impressive, is impressive and will certainly impress more than one generation.

In 1560 in Rome Veronese acquainted with the works of Michelangelo and Raphael.

In 1566 Paolo Veronese married the daughter of his uncle and teacher, Antonio Badile. He became a doting and loving father to his 4 children. By the way, one of the sons Paolo was named after his father Gabriel.

In 80-e years the artist began to lose their former strength. In the dreams about the rest, in 1583, Veronese acquires the estate, which settled with his wife and children. And in 5 years ill with pneumonia and dies. Buried Paolo Veronese Church of San Sebastiano.

Paolo Veronese lived exactly 60 years. The greater part of his life he spent away from home, in Venice, where he died. But the artist always remembered about home. Those memories were the source of his inspiration.

After the death of Veronese, his sons formed a community of “followers Paolo” and under that name released their paintings. But, in comparison with his father, they were not as talented and their creations did not bring any success.