The baptism of Christ, Andrea Verrokkyo and da Vinci 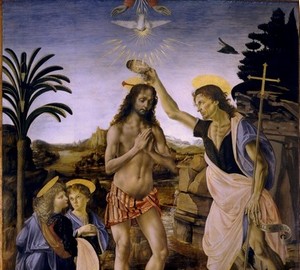 Being primarily a sculptor, Andrea Verrokkyo (1435 / 1436-1488) performed picturesque orders with interruptions, as a result of which one of his paintings – “The Baptism of Christ” – could not finish. He asked to complete the begun student Leonardo da Vinci (1452-1519), a young but already achieved great success by then, although he remained in the teacher’s workshop. The central figures and the angel on the right have already been written in a typical manner for Verrocchio – a dry, linear, with exquisite silhouettes of figures.

Leonardo depicted an angel standing on the left, but used not a temper as a teacher, but oil paints that dry longer and allow you to transmit a soft light, envelop the image with a light haze. So the then famous Leonard technique “sfumato” was born. The artist also wrote part of the landscape behind the angels, the basis of which was his drawing with the image of the Arno River Valley. The work of the young painter struck Verrokkyo and became so popular that copies were made from this group of angels.