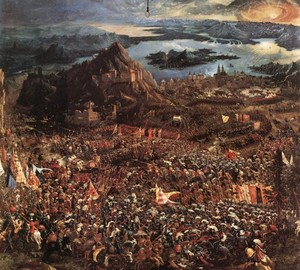 The Battle of Issa, or the Battle of Alexander with the Persians – Albrecht Altdorfer. 1529

Bavarian artist Albrecht Altdorfer lived in. Regensburg. In 1511. he traveled down the Danube south to the Alps. The beauty of those places made a deep impression on him, and he became one of the first painters to portray landscapes emotionally and expressively, and not just as a convenient background for the picture.

The pinnacle of the art of the painter was the painting of the Battle of Issa (1529), written for William IV, Duke of Bavarian. In it, heaven, sea and earth play the same role, and only a sign in heaven indicates that this is the same battle in which Alexander the Great defeated the Persians on the Isse River in 333. to n. e. According to the armor of the soldiers and the architecture of a distant city in the background, this scene might seem to be related to the XVI century.

To create a sense of grandeur, Altdorfer drew a batalia like a bird’s eye view. In front of the audience, a seething whirlpool of tiny silhouettes of soldiers merging into a single mass opens against the backdrop of a mountain landscape, where the sun dramatically breaks through the clouds, driving away the moon. Alexander fights in the forefront of the soldiers in the thickest battle, pursuing the Persian king Darius in his chariot.

ALEXANDER MAKEDON. Alexander, King of Macedonia (356-323. to n. e.), – the most famous of all the conquerors of antiquity – was a student of Aristotle, already at the age of 18 he commanded cavalry; defeated the Persians, conquered Egypt and founded Alexandria. In the temple of Apollo, the Dolphic sivill predicted to him that he was invincible. Alexander the Great is often portrayed on horseback on his horse Bucephalus, a white stallion that obeyed only his sensitive hand.

According to legend, when the army of Macedonian captured the Greek city of Fiva, one of the commanders subordinate to him raped a noble woman Timoklei, demanding that she give her money to him. Timoclea brought him to the well, in which she allegedly hid her jewelry, and when he bent down to look down, she pushed him into the well. For the deed, the woman was brought to court by Alexander, and he acquitted her. This legend was embodied in the painting by Pietro della Vecchia (1602-1678) by Timoclea, brought to Alexander, where the moment of the liberation of Timoclea by Alexander is captured for her greatness of spirit and self-esteem.

After the battle of Issa, Alexander showed the same nobility and generosity to the defeated Darius and his family. When his army captured and looted the Persian camp, Alexander respected his mother, wife and two daughters Daria. Veronese portrayed Alexander and his friend Gethastion, visiting the royal family, in the picture of the Darius Family in front of Alexander (approx. 1550). Daria’s mother mistakenly mistook the higher-grown Gethastion for her conqueror, but Alexander did not attach importance to the mistake and, jokingly, reassured her, saying that Gephation is another Alexander. Pursuing Daria, Alexander found the king of the Persians dying of a deadly wound inflicted by his own subjects. When Darius died, Alexander honored his enemy by covering his body with his own cloak.

The illustrious Alexander was convinced that it was better to rule through goodwill than through violence, trying to combine different customs. He married Roxanne, which, according to some sources, was the daughter of Darius, and by others – the daughter of the ruler of the Asian lands he conquered.