“The Birth of Christ,” Robert Kampen, is a description of the picture 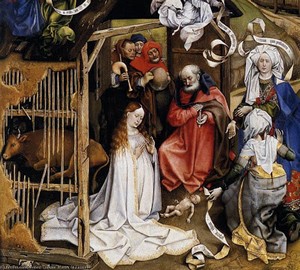 The birth of Christ is a common plot in the works of many artists, but the “Christmas” of Robert Kampen is somewhat different from traditional images.

In the center of the picture on the lap stands the Virgin, dressed in white clothes decorated with gold embroidery, as a sign of its purity and integrity. Red wavy hair emphasizes the delicate porcelain color of a young face. Having folded her hands in a prayer gesture, she, holding her breath, looks at the baby who appeared in front of her on the earth, from whom the golden light comes.

Nearby, kneeling, in a bright red robe, the head of the Joseph family died reverently. By obscuring the light of the candle from the wind, he peeps into the baby with faith and hope.

Near them are two midwives in rich clothes and intricate hats. But one knelt down, unconditionally believing in a miracle. And the other reaches out to her hand, which was taken away after she doubted what was happening. But after touching the newborn, her hand will miraculously be healed. This is evidenced by inscriptions on ribbons, typical of Gothic book thumbnails.

Three shepherds peek out from open doors of bread, looking at the baby. A whole range of feelings is written on their simple and sincere faces: curiosity, surprise, tenderness.

An angel in snow-white robes over Jesus, three more angels delightfully watch what is happening, standing on the old roof of the barn. There was a place in the picture for animals – through a broken wall, a calmly lying cow with expressive eyes is clearly visible.

Juicy blue and scarlet colors, whose shades change from light to darkest, harmoniously combined with olive-green and warm golden-chocolate tones, emphasize the glow of snow-white colors.

And how carefully the wings of the angels on the roof are written out. Similar to bird, they gently shimmer over gently with gently apricot, mother-of-pink, pink-cream shades, changing their color to purple-violet and gray-gray.

The landscape in the background is magnificent, which can be considered as a separate picture. A large fortress spread on the top of the mountain. The winding road goes to a wide calm river, along which ships sail. Behind the trees are visible houses and people. And as a symbol of Christmas, the golden sun rises above the earth.

A huge variety of lovingly written details: pearls and gems decorating dresses, two buttons on Joseph’s sleeve, a bagpipes and a felt hat in the hands of the shepherds.

You can consider the picture endlessly, very bright and lyrical, it gives a feeling of joy and warmth.