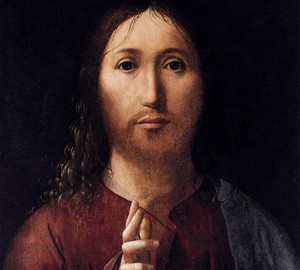 The blessed Christ is Antonello da Messina. Around 1465. Wood, butter. 38.7×29.8
Antonello da Messina (about 1430-1479) is a prominent representative of the Italian school of painting of the Early Renaissance. The mature work of the master is an alloy of Italian and Dutch elements.

The image of the blessing Christ is an iconographic type option that has been defined as “Salvator Muppdi” (from Latin – “Peace Savior”). Christ is depicted without power, a symbol of power, and not crowned. His all-pervasive look and blessing gesture attract attention. The hand raised above the frame is written with a clear perspective abbreviation. She had to amaze contemporaries with the illusion that she was in favor of the plane of the picture and was directed directly to the viewer standing in front of her. A careful look will find that part of the picturesque layer is erased, and under it you can see a slightly different initial position of the hand.

It is noteworthy that one or two decades later, Hans Memling will create a similar image twice. This proves that not only the Dutch masters influenced Italian contemporaries, it was the other way around.