“The brothers of Joseph find the silver cup,” Ivanov – overview of the painting 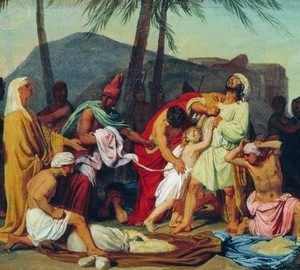 This is the work of A. Ivanov wrote during his stay in Italy. The young artist was paid for the trip by the Society for the Promotion of Arts. In return, he had to send a reporting picture. In search of the plot, Ivanov writes an etude according to the Old Testament legend from the life of Joseph the Beautiful.

The artist depicts the moment when the servants find in the bag the youngest of the Joseph-Veniamin brothers, allegedly stolen silver bowl. Joseph was once sold into slavery by his brothers, informing his father of his death. Joseph became a noble man in Egypt. Upon learning that his brothers had arrived in a country with trade affairs, he invited them to his place, sheltered and fed them. With a trick, Joseph ordered the servant to put a silver bowl in the bag of the younger of the Benjamin brothers to accuse him of theft and keep him at home. Brothers are desperate. One of them is Judah, offering himself into slavery instead of Benjamin. He knows that his father will not survive the loss of his beloved youngest son. Struck by the self-sacrifice of Judah, Joseph opens to his brothers.

The picture is made in the style of academicism. Despite the fact that we have an sketch, the artist was able to convey the emotional intensity of the scene. Especially expressive figure of Judah in the center of the composition. In despair, he tears his clothes on himself. His face expresses pain and hopelessness. He faces a painful internal choice. Frightened Benjamin is pressed against him. Other brothers are at a loss. They are pointed out by hand by the dignity of the servant of Joseph.

On his sketches A. Ivanov received positive reviews from his father, a professor of painting, and then-famous artists – Italian Kammuchini and German Overbek. However, the plan was not destined to be embodied in a full-fledged work. AND. Ivanov decided to write a grand canvas “The Appearance of Christ to the People.”. Work on it distracted the painter from other projects.