“The burial of the Count of Orgas,” El Greco – overview of the painting 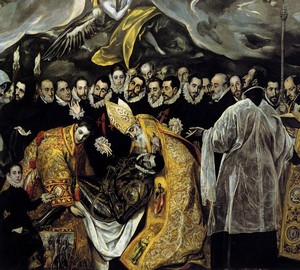 The most famous picture of the great and mysterious El Greco belongs to the heyday of his work. The artist no longer looks back at the teachers, but develops his own manner of writing, which cannot be confused with the styles of other painters. In 1586, the master began designing the Sao Tome Church in Toledo. The central plot was the legend of the Toledsky saint, Don Gonzale Ruiz, aka Count Orgasus, who lived in the XIII-XIV centuries. A pious pious Christian, he became famous for his charity work, and when he died in 1312, St. Stephen himself and blessed Augustine went down from heaven to give the land a worthy deceased.

The picture is visually divided into two parts: “earthly” and “heavenly”. They differ in color decision and stylistic characteristics. The strict rhythm of the lower “floor” is opposed to the baroque “top”. And there, at different celestial levels, the soul of the count is met by John the Baptist, the Virgin Mary, angels and cherubim. Christ sits in the center. The flying angel is deliberately highlighted in white – it is he who exalts the soul of the count to heaven.

Christ, an angel with a deceased soul, and a nobleman below form a vertical axis. The geometric lines in the construction of the composition were very characteristic of El Greco and this picture is vivid proof of this.

The exposition climax is shifted to the bottom of the work, where Stefan and Augustine, bowing, lower the Orgasus into the ground. The saints are dressed in gold dresses that have something in common with the figure of an angel and the clothes of Peter in the upper zone. Thus, in gold, the artist tied the heroes of work related to the world of heaven, to the other.

The presented picture was a huge success in Spain during the time of the artist.

El Greco was later forgotten and reopened by impressionists. Expressive emotional work has a huge impact on the viewer – eyewitnesses testify. An eloquent fact: Salvador Dali even lost consciousness at the canvas. Perhaps this characteristic is exhaustive.