“The Burning of Darkness,” Rerich – overview of the painting 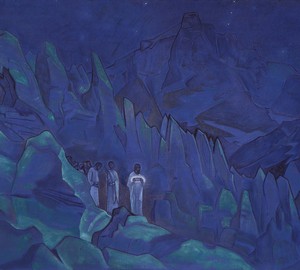 The picture, made in the manner characteristic of the Rerich, is a mountain landscape with a group of people in long robes. It might seem that this area is fantastic, fictitious, but there is evidence that the image accurately reproduces the outlines of a glacier near Jomolungma.

The night is captured on the canvas – everything around is embraced by a blue instant. Bright points of stars are clearly visible in the dark sky, but they do not at all dissipate the surrounding darkness. The mountain peaks located in the distance practically merge with the sky, they are depicted in the same color with it, and only dark contours and deeper purple shadows make them embossed and noticeable against the background of sleeping skies.

The whole gletcher is cut with sharp spiers of blue and blue ice. The upper parts of the glacier are “lit” with greenish-yellow moonlight, but there is no nightlight in the sky. Everything sleeps, immersed in the darkness of the unconscious.

Due to the rotation of the ice rock, as if materializing from nowhere, from the mythical Shangri-La, people appear in long, bright robes. In the hands of their leader, a small object is a casket emitting bright, white light. This is the radiance of wisdom, love and beauty, which is designed to dispel the darkness of the world around us. It will drive away the cold, melt the ice and return to people the brightness of the lost colors.

If you look closely, then behind the backs of people leaving you can see the steps carved in the rock. They rise steeply up and go into a deep dark cave carved in a monolithic rock. Given the alleged location and addiction of the artist, it can be assumed that in the form of this cave in the mountains is depicted nothing more than the legendary Shambhala. People carrying the Light of Truth, enclosed in the casket, are the Great Teachers who came from a mysterious country to dispel the darkness that reigns in our world. This is a metaphorical designation of darkness in the human soul, which so needs a bright and pure light of love, justice and participation.

Despite the use of an almost monochrome color scheme and restrained visual techniques, the picture does not look flat or inexpressive. It has a very saturated, juicy light, and clear, almost geometric contours of rocks and glaciers give it the necessary dynamics.

This canvas is impressive for its depth of content with restrained image methods and the high spiritual idea enclosed in a simple rectangle of the picture.