Two people whom the world owes the creation of the Cairo Museum, to preserve the works of great masters of antiquity, have never met. One of them – Mohammed Ali, ruler of Egypt first half of the NINETEENTH century, the Albanian by origin, literacy is already quite Mature, and in 1835 by his decree banned the export of ancient monuments of the country without special government permission. Another Frenchman Auguste Mariette, who in 1850 arrived by steamer to Alexandria with the intention to acquire the Coptic and Syrian Church manuscripts, not knowing that shortly before the Coptic Patriarch has banned the export of these rarities from the country.

Egypt conquered Marietta, magnetism ancient images are fully possessed him, and he began excavations at Saqqara. Unexpected discoveries are so consumed him that Mariette forgets the initial purpose of his trip, but he is well aware that all extracted with such work artifacts should be preserved for current and future generations. For this you need to monitor the ongoing excavations and to find a place to storage and exposure was found. Born existing to this day the Service of antiquities of Egypt and the Cairo Museum, which was headed by Mariette in 1858.

The first building of the Museum was located in the quarter of Bulak, on the banks of the Nile, in the house where Mariette settled with his family. There he discovered the four halls of the exhibition of Egyptian antiquities. The number of valuable finds, including gold jewelry, is constantly growing. For posting needed a new building, but, as always, was having financial difficulties. Despite the tremendous efforts of Marietta, who had felt love for Egypt, his dedication and diplomacy to resolve this issue did not, and the old building was threatened by annual flooding of the Nile. Mariette gained the love and respect of the rulers of Egypt, he was invited to the opening ceremony of the Suez canal, wrote the story that formed the basis for the libretto of the famous Opera “Aida” was rewarded with the title “Pasha”, but until death did not see the new building. 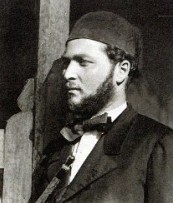 Mariette died in 1881, the sarcophagus with his body was buried in the garden of the Museum of Bulak. In ten years, the collection will move to Giza, to the old residence of the Khedive Ismail, the sarcophagus Marietta will follow there, and only in 1902 finally come true his dream of creating a Museum in the centre of the capital, Cairo. The building was built in the square El-Tahrir’s French architect. In the garden of the new Museum Mariette will find their last resting place, over his marble sarcophagus, located on the left side of the entrance, rises a bronze statue of him at full length, in traditional Egyptian costume of the late XIX century, the Ottoman FEZ on his head. Around – busts of major Egyptologists of the world, among them – a sculptural portrait of the outstanding Russian scientist of the early twentieth century V. S. Golenishchev. In the garden are exposed and finds Marietta – the Sphinx of Tuthmosis III, red granite obelisk of Ramses II and other works of monumental art. Huge lobby, about a hundred rooms located on two floors, one hundred and fifty thousand items and thirty thousand items in the vaults, spanning five thousand years of history of Ancient Egypt, – that represents the Cairo Museum.

His collection is unique. Moving from room to room, the visitor makes an unforgettable journey into the mysterious world of ancient civilization, the cradle of human civilization, affecting the abundance and magnificence of its man-made acts. The exhibits are arranged in thematic and chronological order. On the ground floor are masterpieces of stone sculptures of limestone, basalt, granite, starting from the predynastic to the Greek – Roman time. Among them – the famous statue of Pharaoh khafra, the Builder of the second largest pyramid at Giza, made of dark-green diorite with pale streaks, sculpture of the Pharaoh menkaure, shown surrounded by goddesses. 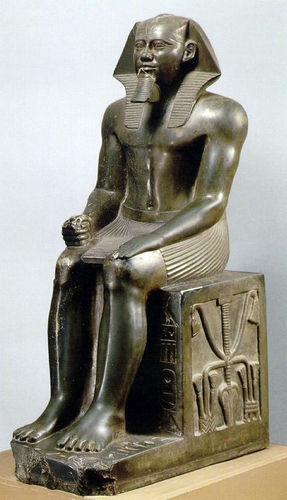 Striking in its beauty and subtlety of execution, the sculptural group of the couple of Prince Rahotep and his wife Nofret from the painted limestone. Amazing wooden statue of Kapera, dubbed “the village chief”: in the time of discovery working of Marietta was struck by the similarity of the features of the statue, with the face of the headman of their village.

A separate room is devoted to the treasures of the Queen of Hetepheres, mother of Pharaoh Cheops, who built the famous pyramid. Among them – a chair, a huge bed, a stretcher, covered with gold leaf, jewelry box, decorated with inlaid stones in the shape of butterfly wings, with twenty silver bracelets. Same here – massive sarcophagi of various epochs of red and black granite, the boats of the pharaohs of precious wood, granite sphinxes of pharaohs. In a separate room – the colossi of the Pharaoh-the heretic Akhenaten and a statue of his wife, Nefertiti, with fame and beauty which can compete Mona Lisa Leonardo da Vinci. This is not a complete list of what can see the visitor on the ground floor of the exhibition.

The undoubted masterpiece of the collection – the treasures of Tutankhamun, which became a sensation early twentieth century. Striking is not even the abundance of gold, although only one mask of Tutankhamun weighs eleven pounds, and the highest quality jewelry work with precious metal, precious stones and valuable sorts of wood. Jewelry of Tutankhamen, including a wide gold necklace, inlaid with turquoise, lapis-lapis, and coral, massive earrings, a pectoral with mythological subjects, are not equal. The furniture is made with a special grace, even a great upholstered in a Golden ark, in which was placed the sarcophagus, admired the subtlety of his performance. Full of lyricism scene on the back of the chair of Tutankhamun, showing a loving couple young rulers of the vast country.

The abundance of unique pieces of art, exuding a remarkable energy images, since the opening of the tomb gave rise to a lot of mysteries, fantasies, and legends. X-ray analysis of the mummy of Tutankhamun, held recently, showed a definite kinship with the Pharaoh-reformer Akhenaten, who was his father. A cause of death of Tutankhamun – a fall from a chariot while hunting, whereby was obtained an open fracture of the patella, and there was a outbreak of malaria in the body. Even with a high level of development of ancient Egyptian medicine to save Pharaoh failed, he died at the age of 18 years.

Those who after examination of the collection of Tutankhamun, dare to come into the next room, where are stored the treasures of the pharaohs from the twenty-first Egyptian dynasty (XI-X century BC) to the Roman time to expect another miracle. If the collection of Tutankhamen was destined to travel over the world, delighting people of all ages and nationalities, the gold and silver jewelry found at Tanis, much less known. The most impressive are the treasures from the tomb of Pharaoh Psusennes I, who ruled in 1045-994 BC And his retinue. Among the masterpieces of jewelry art – wide necklaces with pendants and pectoral of gold inlaid with carnelian, lapis lazuli, green feldspar, Jasper.

Priceless chalices of silver and electrum in the form of a flower or floral motifs found in the tomb of Angelaangela, commander Psusennes I, a vessel for ritual libations, Golden statues of goddesses, gold funerary masks of the pharaohs. Unique two sarcophagus of silver that was highly prized in Egypt, for gold to Pharaoh, according to the rulers of neighboring countries were the same as sand under the feet, same silver products – units. One sarcophagus with a length of 185 centimeters belongs Psusennes I . Pharaoh mask decorated with gold that adds volume and elegance to his face. In the other, rested the Pharaoh Shoshenq II. The length of his sarcophagus 190 centimeters, in place of funerary mask – head of a divine Falcon. 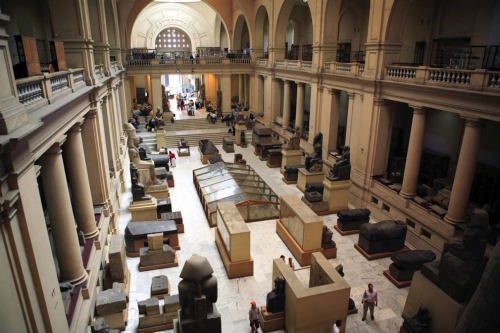 In a separate room, where supported special temperature and humidity, are mummies of many famous pharaohs of Egypt. They were found in the necropolis in Qurna 1871 by the brothers Abd El-Rasul, who for many years kept the secret of his discoveries and profited from trade treasures. From time to time under cover of night, they pulled from the cache and sold on the black market. To stop the looting helped the quarrel between brothers over the division of spoils. Mummies, carefully hidden by the priests, thousands of years later was raised to the surface and immediately loaded on a ship heading North, to deliver discoveries to the Cairo Museum. On the whole route of the ship on both banks of the Nile were residents of the surrounding villages. Men fired rifles, saluting his famous ancestors, and women, as if descended from ancient Egyptian reliefs, papyri, with uncovered heads and flowing hair mourned the mummy, watching their burial, in the same way as it did in Egypt many centuries ago.

In the middle of the III Millennium BC on the walls of the pyramids of the pharaohs were inscribed the words: “O Pharaoh, you go dead, you left alive.” The author of this text did not even know what the continuation of life is waiting for owners of the pyramids and tombs. And although the names of those who built, sculpted and worked for their kings, disappeared in the maelstrom of history, the spirit of Ancient Egypt is in the walls of the Cairo Museum. Here there is great spiritual power of the ancient civilization, the love of his country, a phenomenon unlike anything any other culture of the state.