“The Ceres offering, the goddess of the harvest,” Jacob Yordans – a description of the picture 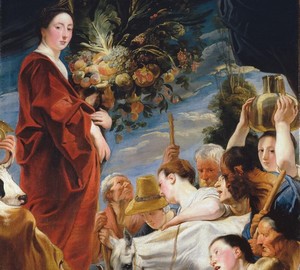 This canvas perfectly reflects the Baroque style and the creative manner of the master. The picture depicts people bringing gifts (sacrifices) to the Roman goddess of fertility – Ceres. She was considered one of the most powerful and revered goddesses, because it depended on her will be people with a rich harvest, or until the next season they will have to starve and be in poverty.

In order to propitiate the goddess, she was brought all the best that she managed to grow and feed in her household. The picture of Ceres depicts a beautiful young woman in dark red velvet robes. She stands in the right corner of the picture sideways to the audience, but turning to face them. He is calm and majestic, even seems indifferent, she does not care about the fuss and the simple people standing in front of her lap. With a detached look, she looks at the viewer, with all her being expressing an absolute difference from people with their important small life problems.

In the hands of Ceres holds an abundance horn, filled to capacity with various gifts of nature. He is very heavy and massive, so the goddess presses him against himself with both hands, however, not showing that it is difficult for her to hold such a massive object.

At her feet there is a multi-figure composition of people and animals. Among them stands out a white horse in the center, on which a woman rests with her hand, looking away from the viewer. At the very feet of Ceres, cows are visible – these animals have always been among the most important offerings to the goddess, because they are able to multiply and feed the population.

There are many children in the picture, and in the lower left corner with a prayer, a woman with a baby in her arms turns to the goddess. She prays to her for mercy, perhaps her mother does not have milk to feed her baby. A woman with a vessel on her head, old men, a dark-skinned man of middle age, young women and children – all gathered to ask for mercy from Ceres.

The canvas is distinguished by the warm, saturated color characteristic of the artist and thick dark shadows that give the figures relief and volume. The colors of the picture for all the wealth of the color scheme fit perfectly with each other, without creating excessive variegation.

This complex composition with many figures and a specific image is characteristic of that era and for the entire work of the master. She is recognizable and beautiful. In terms of skill, Yordans is very close to Rubens, not in vain that the greatest master kept three paintings by a Flemish artist. This picture is a contribution to his immortal legacy.