“The Comedian Family”, Pablo Picasso – overview of the painting 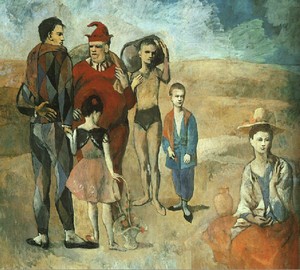 The Comedian Family belongs to the so-called pink period of Picasso’s work, which replaced the sad “blue period”. The artist became interested in images from the theater and circus, pink-golden, reddish and pink-gray tones appeared in his palette, and stray artists – clowns, dancers, jugglers and acrobats from Medrano circus, where the painter often visited and painted his friends, became the characters in the paintings.

The author placed the figures of comedians in a deserted landscape devoid of vegetation against the background of a blue sky covered with clouds. On the left is similar to Picasso Arlekin himself, who holds the girl by the hand, next to them is the director of the troupe – a fat man dressed in red tights and a cap of jesters on the right – two young acrobats. The whole composition is balanced by a lonely figure of a seated girl in the foreground. The characters are static, there is no inner proximity between them. And although they are together, the cold of inner loneliness fetters everyone. The circus performers froze as if waiting for some team or order to move on. Most of Picasso’s pink works are imbued with the spirit of tragic loneliness and deprivation.