“The Court of King Solomon,” Nikolai Nikolaevich Ge – overview of the painting 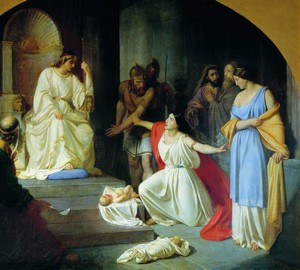 During his studies at the Academy of Arts, Nikolai Ge was fond of the work of Karl Brullov, considering him the most acceptable role model. It is not surprising that his early paintings bore a clear imprint of the influence of this great artist.

The canvas “Court of King Solomon” is a prime example of such a strong impact. During their studies at the academy, students were offered classic topics, so the choice of a well-known biblical plot should not surprise anyone. Like the clear influence of Brullov’s work. It can be traced in several theatrical gestures, and in the classical composition, and in the use of clean and bright colors.

Despite the clear desire to imitate the adored idol, Ge’s work traces the undoubted artistic gift and ability not only to properly build the composition, but also to convey fairly living emotions. For the plot of the picture, a traditional theme from the Old Testament of the Bible was chosen. This is the judgment of King Solomon.

Two women came to the great ruler, each of whom considered herself the mother of the baby. None of the parties wanted to yield. The wise king proposed to divide the baby in half so that each of the women would get an equal part. A true mother is terrified of this perspective. She renounces her claims in order to save the life of her child. The second agrees to the decision of the king. Solomon understands that a real mother is a woman who is ready to renounce a baby in order to save him. He gives the child to one who is not ready to sacrifice the baby, but in the name of love for him he is ready to sacrifice his happiness and even life.

The picture is very spectacular both in composition and in color. Brochure outfits, a beautiful composition and a creative approach to the solution indicate that the artist will soon show his true gift, and will move away from blindly copying the style of the famous master.